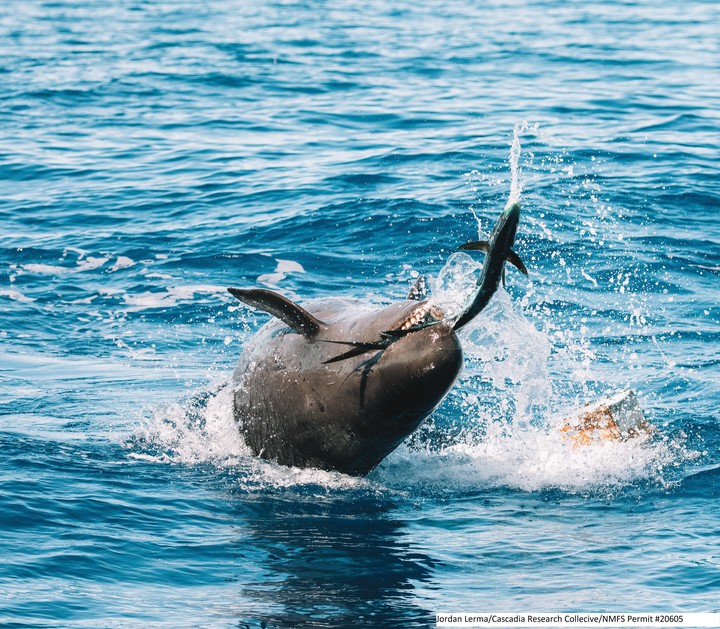 The main Hawaiian Islands are home to an endangered, resident population of false killer whales (Pseudorca crassidens). Interactions with nearshore fisheries are thought to be the greatest threat to the population’s viability. Each island area hosts an array of State-sponsored fish aggregating devices (FADs) – buoys anchored to the seafloor designed to attract schools of pelagic fish that naturally associate with floating objects. Illegal “private” FADs also occur around the islands, although their locations are not public. Fishes associated with FADs are also important to false killer whales’ diet (e.g., tunas, mahi mahi), and fishermen have often reported that false killer whales are regularly found around FADs. To better understand whether FADs exacerbate the risk of fisheries interactions, location data from satellite tags deployed on 44 false killer whales from 2007-2021 (duration=13-199 days; median=49 days) were fit to a state-space model, predicted hourly, and related to State-sponsored FAD locations. Tagged whales spent a grand median of 57% of their time within 20km of FAD locations (median distance to nearest FAD=17km) yet seldom within 5km of FAD locations (median percentage of time=9%). Some differences in proximity to FADs by time of day and social group were detected. Whales broadly spent the most time near FADs off southwest and northeast Oʻahu, north and southwest Maui Nui, and northwest Hawaiʻi, while FADs revisited most frequently within a 5km radius were off north Molokaʻi and southwest Lanaʻi. Periods with lost/discontinued FADs have not been accounted for, thus our current results overestimate time near State-sponsored FADs. While the existence of an unknown number of illegal FADs limits our ability to properly characterize their influence on false killer whale spatial use, our assessment using known FAD locations serves as an initial step towards understanding the role of FADs in false killer whale-fisheries interactions in Hawaiʻi.